Back in the day skates were nothing more than an iceskate with wheels instead of blades, a lot has changed since and with a long list of different types, it can become quite the mouthful for any newcomers. However, don't fret just yet, because rolling on a pair of skates is too much fun and such an all around sport to not want to give it a go.

Roller skating is the perfect summer sport to those who want to skate when no snow's around. Your age and gender doesn't matter, skates are for everyone. Of course, certain types of skates goes better with the type of roller skating you want to do.
That's why the first thing you should decide, when buying skates, is what skate fits best for you and your plans with them. Since some skates are better for tricks and stunts on ramps, others for fast placed racing and manuevering, while a third pair of skates works best for nice short trips, dancing and regular excersizing, outside or indoor and much more. All of these informations will be gone through down below.

Different types of Skates - Which type goes best for what and whom?

Generally skates are catgorised between inliners and side-by-side. Inliners is skates where the wheels are lined, while side-by-side skates got two wheels at the front and on the rear.

The best skates for kids has a tall boot to grant stability around the angle and the lower part of the leg. This helps children keep the proper riding stand and gain control of the skates.

Even though kids gorw alot, skates nowadays last longer than one season. Adjustable skates give the possibility to range about three normal shoe sizes. The skates are the same width thoughout the adjustable size range - this is normally not a problem because the boot can be tightened and it is flexible, designed to fit growing feet. 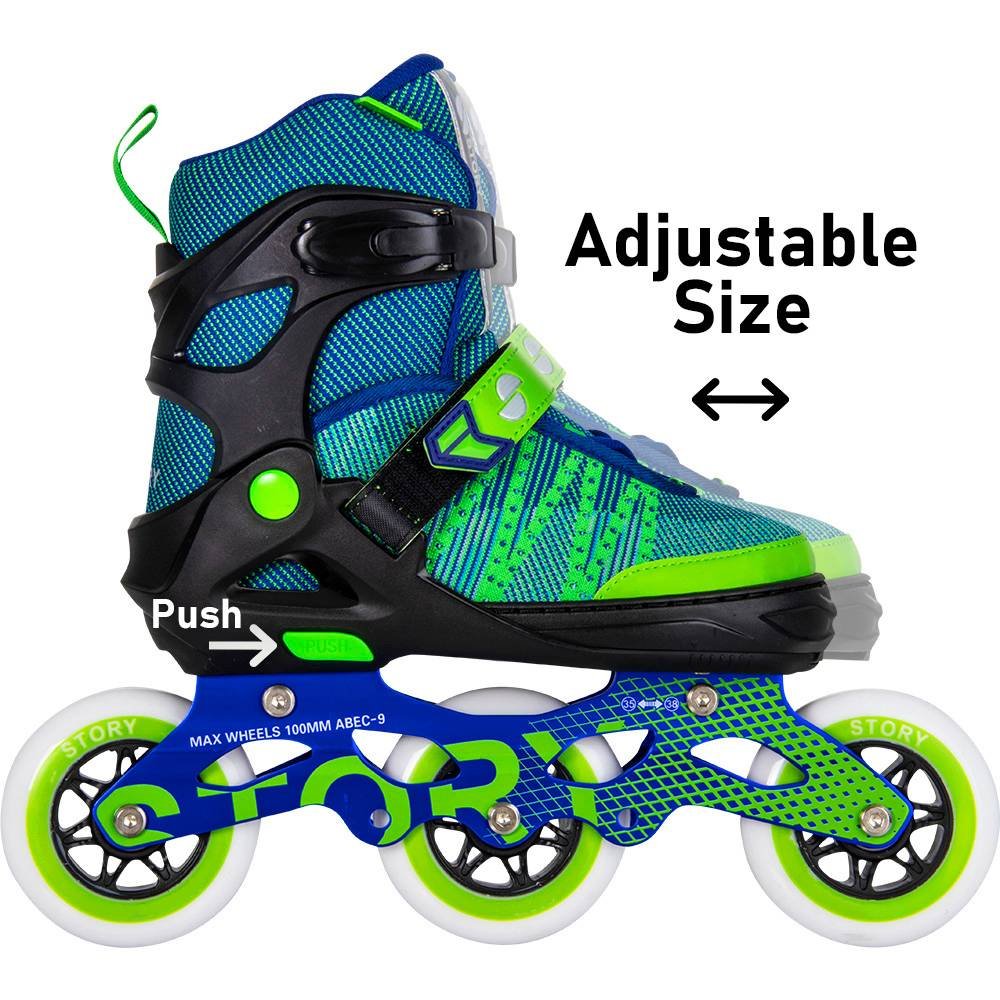 Fitness inliner skates are comfortable and accessible for everyone. There exist models for adults and children, both girls and boys. They can be used on tours with family or friends, as well as exercises. You'll find Inliner skates for all skill levels, beginners and experienced skaters.

Fitness inliners skates is designed with soft wheels so you can roll over uneven surfaces on the asphalt. Bearings with a high ABEC-rate gives a much better rolling velocity.

Most fitness inliners skates have a break installed. The break can be removed and typically you can decide for yourself which foot you want it placed on. It's always reccomended to buy a few extra breaks, since the break can be worn out in time and sometimes it has been seen that when certain models aren't being made anymore, the same applies for the breaks. However, this rarely happens to the most known brands.

Fitness inliners skates are typically equipped with a blade made of aluminium. This makes them more stable and the transfering of force is better than with nylon and compost blades. Unless you want to be fast for racing, then it won't matter which blade you choose, but if so, you should go for aluminium blades. 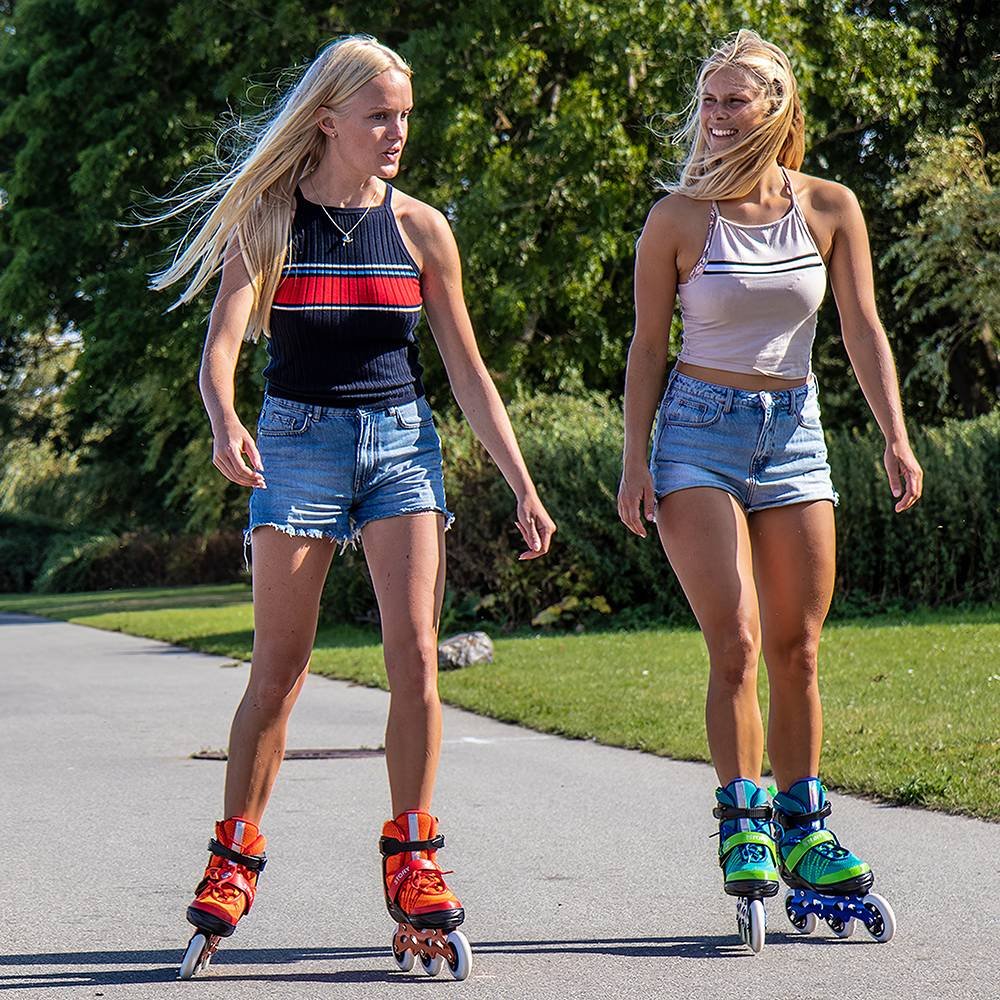 Roller skates (or side-by-side skates) are skates for just about everyone, doesn't matter if you're young or old, child or an adult. You can be a beginner as well as an experienced skater on these skates. They can used for exercising, for the short nice trips and the longer travels. Some can even be used to certain types of dancing, such as disco.

Roller skates is known for having four wheels, which in pairs are placed next to each other. This is the reason they usually are easier to skate with, since your stability when standing with them improves. Their design is also known for its retro look and reminds the older skaters of roller skates from back when they were younger.

For the Roller skates, bearings aren't as important to focus on, since you rarely ever will meet the same velocities as one would with inliners skates.

Roller skates has a truck and plate on the bottom. Oftenly the plates are made of nylon, which makes the skates weigth less. The trucks on the hand are made of aluminium, which of course makes them stronger, but also heavier.

Another thing that has made the roller skates known is the toe-stop, which is used as a break and to start off. It's recommended to replace this before it worns out. 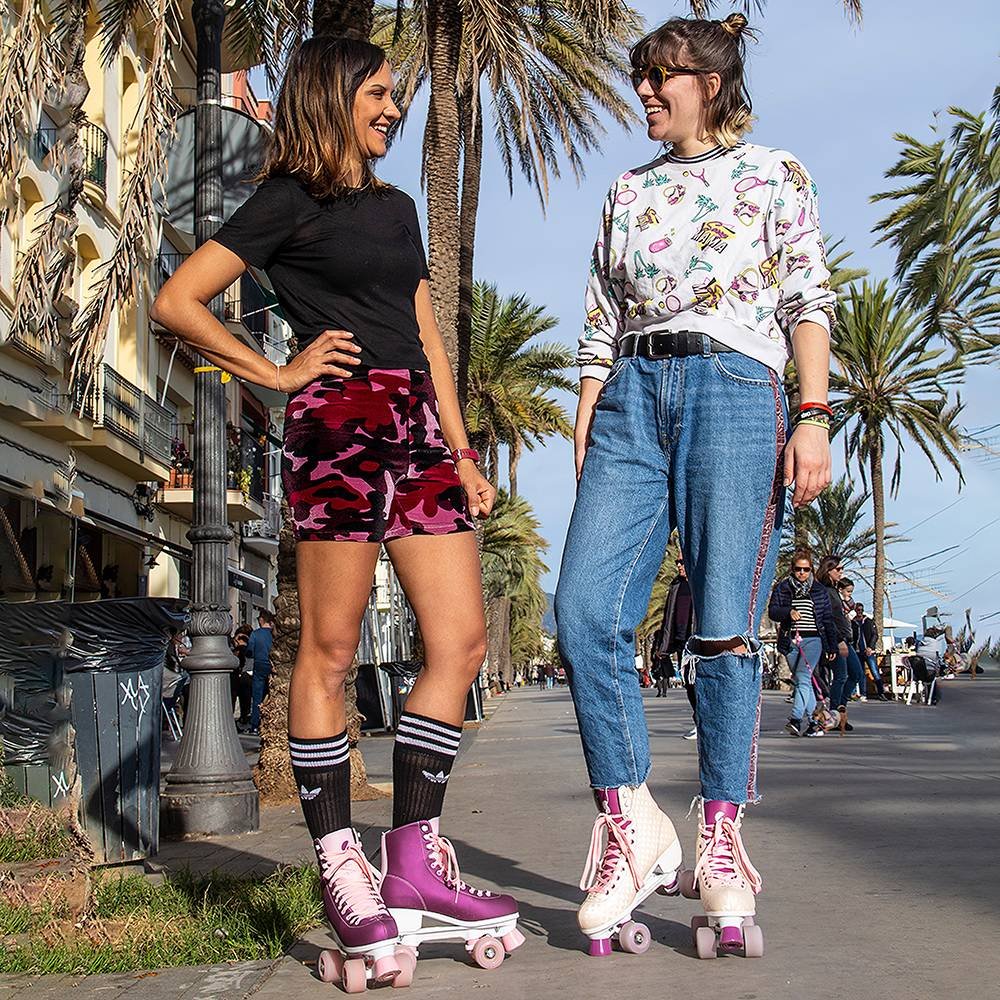 Certain skates are specially made for either tricks, crazy stunts and freestyleskating or speed and manuevering.

These skates are therefore best suited for the more experienced skaters, who participates in various sorts of competitions and maybe are members of clubs where they race. For these skates, one should be able to handle high velocities, experienced with performing tricks and making sharp turns.

When choosing a wheel size, what matters is the distance you want to skate. On further distances it is best to go with a bigger wheel size, since it will be easier to keep up the speed and the energy you spend drops.

On shorter distances the smaller sized wheels is preferable, as you will discover that it'll become easier to execute manuevers and stopping up by incoming turns. 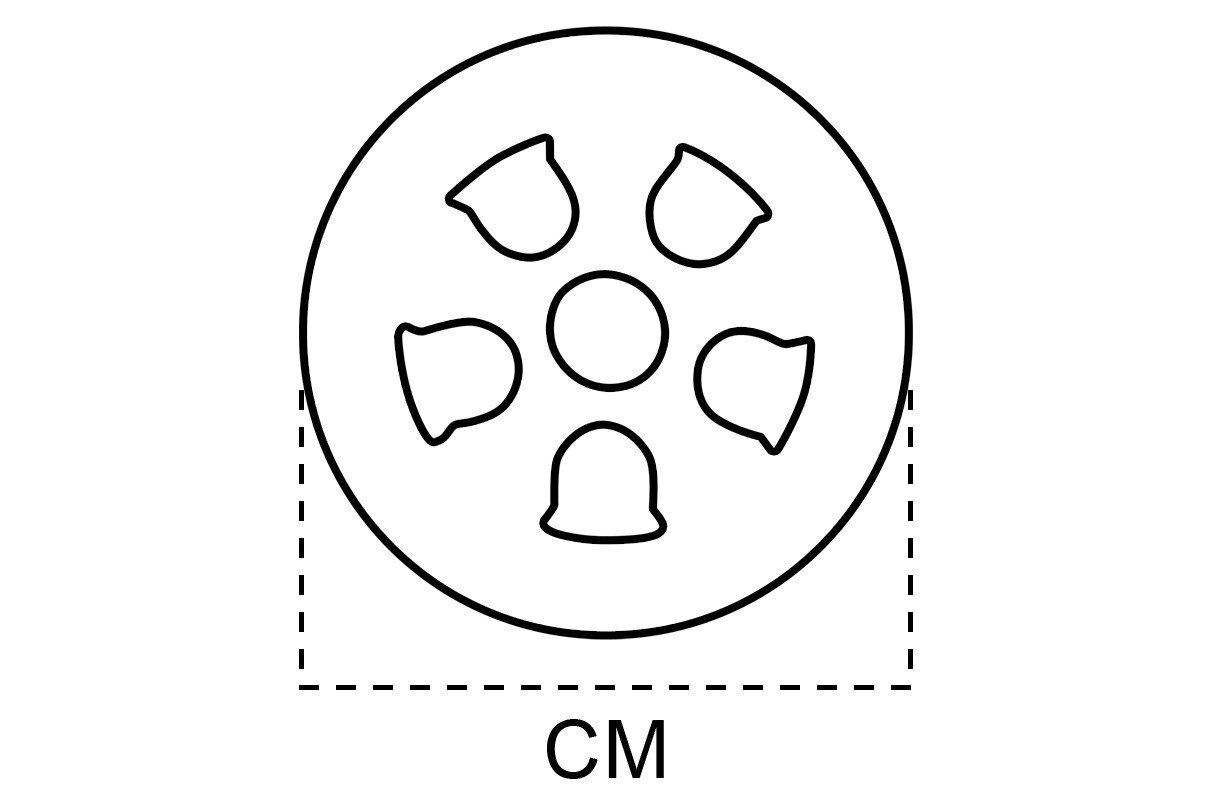 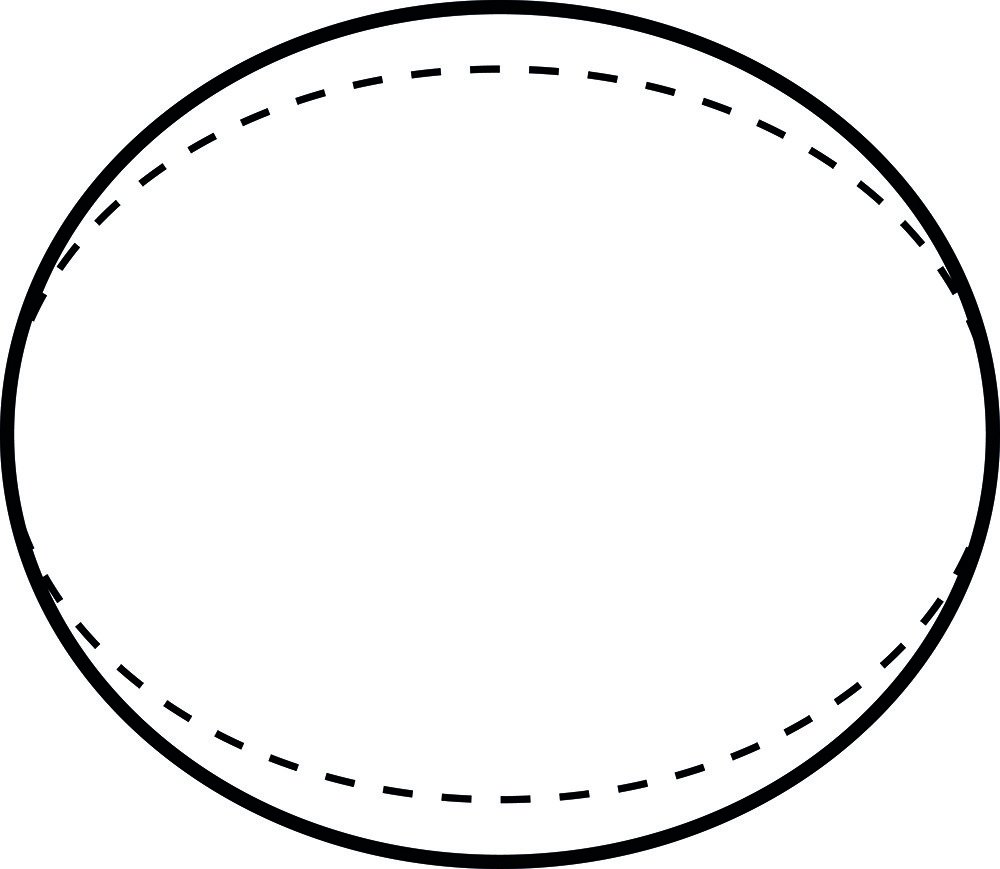 When it comes to whether to pick hard or soft boots, it's a matter of preference. Some enjoys a hard boot, since it gives improved stability and control. While others would rather chose a soft boot, as it is often comfier and grants great ventilation. 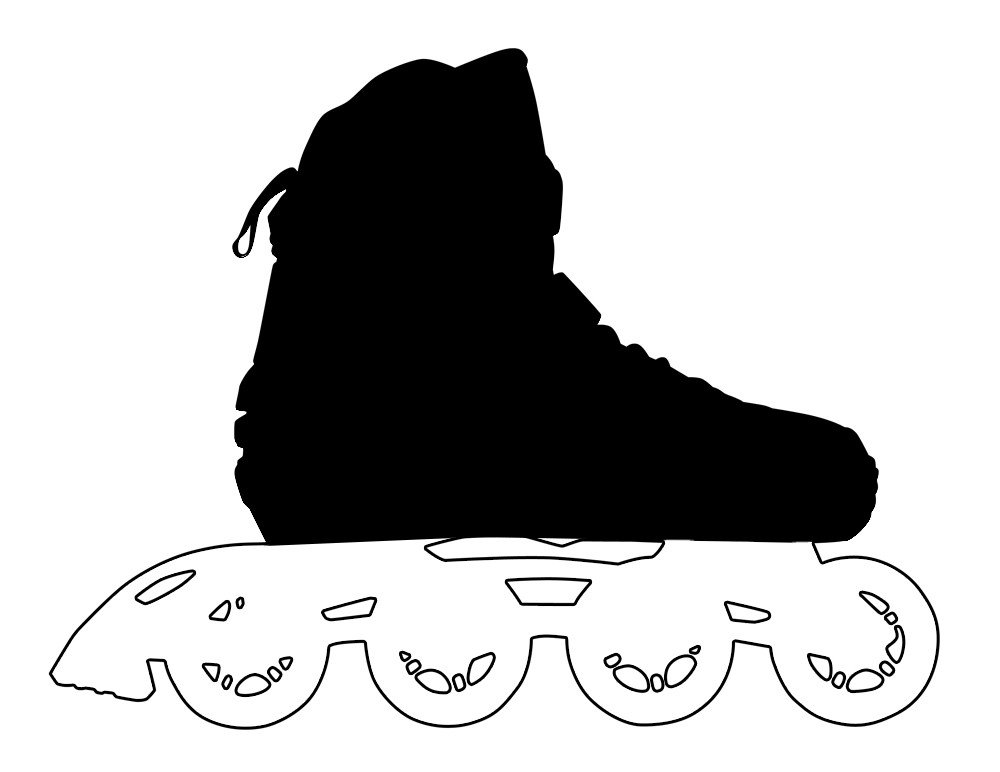 We have a specific sizeguide for (almost) all our models of skates. View the sizeguide on each product.

Adjustable rollerskates:
Here you can adjust the length of the skate, so that it fits the guiding tips for children above. Remember you have to do this before you fasten the rollerskate.

Rollerskates have to be "worn" a little.
The actual material of the boot can be quite stiff, but will adjust to your feet after you have worn them a little. This usually means a few trips.

As with many other sports, protection is a great idea, much better than being injured.

We therefore recommend that you buy the necessary equipment in form of helmets, wrist guards, elbowpads, knee protectors. Furthermore there is gloves specially made for freestyleskating, which gives a better grip and comfort for the hands.
Equipped with all these various means of protection you'll be ready to take on roads with a sweet pair of roller skates.

We only offer the best quality protection and equipment, which you can find on our site down below.

See our full range of protection

If you want to try out tricks and fast paced skating, you can find find ramps to practice on and gradually improve your moves.
These ramps are of sizes that makes it easy to travel with, and take along wherever you want to go.